In giddy anticipation of the Chucky TV series dropping later this year, I watched all the movies starring our cute lil’ killer doll so you don’t have to! 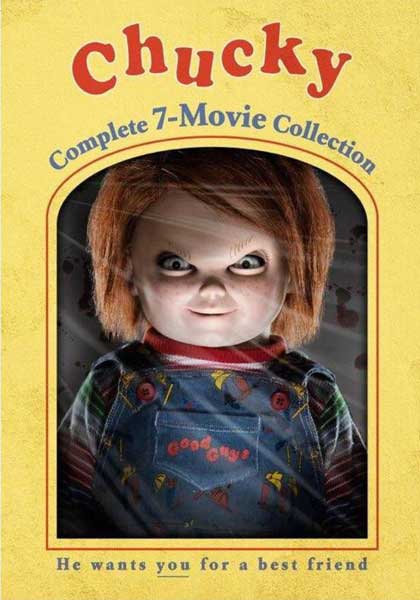 A taut suspense tale and a timeless classic. I'm serious as a hammer to the head! Catharine Hicks deserves way more recognition than she receives in the annals of horror heroines. A tight script and slick set pieces make this entry the only Chucky movie that approaches true Twilight Zone-style terror in the way it vibes off the close - sometimes too close - relationships that kids have with the toys they christen with entire personas.

Lots to love, including a knife-sharp “funhouse of horror” aesthetic, wide-angle lenses galore, and savvy actors who play every scene like an earnest after-school special spattered in blood. It’s the most visually accomplished and tonally balanced movie of the bunch.

It’s the ‘90s! The Scream vibes - not to mention the Craft vibes - are strong with this one. Gay series creator Don Mancini starts to lean heavy into the queer aesthetics, serving up a gay best friend character (with frosted tips!), an appearance by trans performer Alexis Arquette, sustained reverence for gay horror legend James Whale, and a relentless camp sensibility. Also, John Ritter showed up, and I started crying.

At times, it’s a more biting Hollywood satire than, say, Scream 3, but Seed fizzles out with dated pop-culture gags and blue humor. We’re talking “Martha Stewart goes to prison” jokes and a whole scene where Chucky masturbates. The script sort of dabbles in pro-trans/nonbinary rhetoric, albeit in rude and slipshod ways. The animatronic work hits franchise highs here - the range of facial expressions on the trio of killer dolls made them feel as fully realized as Pixar characters. An extended John Waters cameo gives the franchise a firm push into camp with a capital CAMP.

Released in 2013 as our current age of “prestige horror” began to pick up steam, Curse seeks to recapture the spare suspense of the first movie and often succeeds. However, the instant that Chucky comes to life and delivers his Andrew Dice Clay-style one-liners, the tension deflates and you remember you’re watching a direct-to-DVD sequel awash in crude color correction, when you can be doing literally anything else with your life.

Protagonists repping all eras of the series pop their heads in for a fun hello. Alas, while this could have been the Avengers: Endgame of the Chucky Uncinematic Universe, it ends up feeling more like a high school reunion in which no one shows up at the same time. Cult is tonally inconsistent, too: some scenes aim for gory-beautiful imagery (lots of snow and skylight glass, all of it pretty and portentous but signifying nothing), while some scenes opt for bawdy slapstick. The third act all but screams “lol we give up” and threatens to negate the entire series, when Chucky achieves a major goal and the script plays it off as a cheap dad joke. It’s like Frodo casually FedExed the ring to Mordor in hour 2 of Return of the King.

Despite the franchise's wild swings in tone and quality, I'm looking forward to the TV series. Unlike other long-running horror franchises, the Chucky saga carries the distinction of a single narrative continuity overseen by a single creator. Mancini has made his pet series weirder and gayer with each installment. Now that he’s continuing the story in a cultural landscape less openly hostile to queer sensibilities than in 1988, subtext can finally become text and Chucky can let his rainbow knife fly once and for all.